Fresh off the Press

Every Day is Women’s Day at Avon

Celebrating 130 Years of Empowering Women with Beauty for a Purpose

For 130 years, Avon has stood for Beauty for a Purpose, empowering women across the globe to feel beautifully confident, financially independent, and gratified in enriching the lives of others. Today, this six-million-strong sisterhood of Sales Representatives continues to flourish, with every Avon woman empowered to reach for her dreams with one hand, while guiding her fellow woman with the other.

Avon Philippines General Manager Emie Aguilar-Nierves says, “At Avon, we strive to make every day every woman’s day. Her wants and needs are at the heart of each product and program we create. Since the time women were granted the right to vote up until present day, it has been Avon’s mission to create a world with more empowered women, because empowered women bring more beauty to the world. For 38 years now, Avon Philippines has provided the Filipina with products of demonstrable quality and an unparalleled earning opportunity, enabling her to achieve virtually limitless success.”

This International Women's Month, the company for women celebrates the stories of exceptional Avon Ladies who have not only realized their personal goals, but have brought Beauty for a Purpose to their families, communities, and the world.

“What’s most empowering is knowing that you’re helping someone else succeed. Being a guide and mentor make me so proud, and it works both ways—I inspire them, they inspire me.”

Marites sold her first Avon products when she was in college. Customers were her classmates and professors who looked to her for updates on the latest beauty trends and makeup. With the Avon brochure in hand, she was able to earn extra income while studying. After graduation however, she ceased her side line business and went on to become a bank teller.

Marites recalls, “I would spend my entire days in the office processing and counting other people's money. After a while, I began wishing that someday I would be counting my own money instead, and I would be my own boss.”

In 2003, Marites stopped wishing and took matters into her own hands. She signed up as a fulltime Avon Representative, and as with any new venture, the beginning was challenging. “I acquired a small space in our market and grew my group from scratch. I remember holding my first meetings in our garage. We didn’t have a lot of resources, but we made it work.” Later that year, she and her husband gave birth to their first born child, and as the business began to take off, her earnings helped cover the new expenses.

Realizing the great potential, Marites and her husband made the decision to dedicate all their time to cultivating their Avon business. With persistence and teamwork, they have sent their two daughters to reputable schools, bought their first car, and travelled to places they once only dreamed of.

“What has Avon done for me? For one, it taught me how to dream, and dream big. Nothing is too far out of reach. Avon has also given me this bigger sense of purpose – I get to watch the women I work with succeed alongside me. With Avon naman, it doesn’t matter where you’re from or where you have studied. Ang importante is kung gaano ka kasipag. Ang laging sinasabi sa akin ng parents ko, ‘Huwag mong tingnan kung anong sinasahod mo. Tingnan mo kung ilan ‘yung natutulungan mo.’ Kaya my vision talaga is mas marami pang ma-motivate through Avon.”

“To me, Avon is a business and a family at the same time. We support and empower each other every day. Regardless of a person's background, we encourage them to aim high, dream big, work hard, and eventually they can achieve it all. I’ve stayed with the company this long because I enjoy what I do and I love the perks that come with it.”

This 2016, Dulce celebrates her 38th year as part of the Avon family. What began as a simple invitation from a friend in has turned into a lifelong journey and purpose-filled career.

“I used to work in the marketing department of a bank,” Dulce reminisces. “As with many other women, I ventured into Avon as a side line first, just testing the waters. I invested in only specific products, began selling them to friends and neighbors, and eventually started joining beauty fairs and other selling activities. I watched as my sales gradually grew bigger and bigger, until finally Avon became my main source of income. Imagine a monthly salary of 180 pesos working at a private company versus 60,000 pesos with Avon, where I was the boss.”

Dulce shifted into Avon full time and continued to prosper through her rapidly expanding business. She found that the harder she worked, the more women she helped, the more purpose she found. “Unlike working in a company where you clock in and out, and your promotions are heavily dependent on your tenure and your superiors, Avon gave me the opportunity to call my own shots—and with the Sales Leadership opportunity, I could advance my level based on the sales I reaped and the women I trained and mentored.”

Being her own boss was a privilege and a challenge. “I gave it my 101%! There were no holidays or weekends for me—those were the days my customers were at home and ready to shop, so that’s when I worked hardest! At the same time, I developed a strong relationship with my downlines (the women I recruited as Avon Representatives), and made it my mission to help them succeed.”

Being one of the longest tenured members and among the highest-ranking Sales Leaders of Avon Philippines, Dulce is an inspiration to hundreds of thousands of Representatives across the country. To women considering Avon as a business partner, she says, “This is not just a beauty company you’re looking at, it’s Beauty for a Purpose. When you buy from Avon, your money goes into the pocket of another woman, not a faceless chain. As a Representative, you are in a unique position to empower others. Avon gave me the confidence and means to support my family, and inspire hundreds of downlines! To know that my daughter now enjoys the same Avon opportunity makes me happy to say this is truly the company for women.” 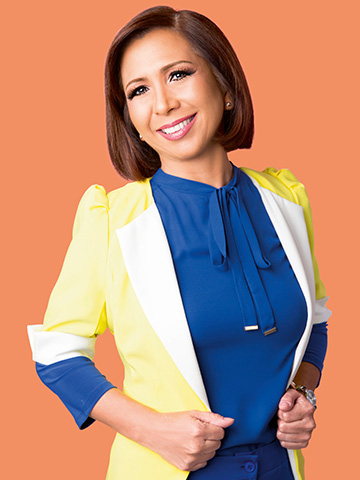 "If the corporate life is not for you, and you’re looking for a business of your own, try Avon. You will be the boss here, and your earnings will match your efforts."

Daughter of Representative Dulce De Leon, Liz recalls growing up in an Avon household, “It’s in my DNA. My mother has been with the company for almost 40 years now, and it has always been a part of our family. In elementary, I even volunteered to sell products at school and help out in whatever small ways I could. I enjoyed it!”

Years down the line however, Liz would take a different path. Together with her husband, she spent seven years with a corporate job in the United States, where almost all of her time and energy was devoted to work.

Yearly, she would travel back to the Philippines to visit the family, and on one of these trips, Liz noticed, “My family here was much more relaxed than I was. They had control of their schedules; they could take time off—because their Avon business allowed for that kind of flexibility. I realized that even if the dollar is considered a ‘mightier’ currency than the peso, my family here had more spending power than I did. Most importantly, it was the flexibility that I valued.”

It was then that the couple decided to migrate back to the Philippines, and Liz signed up as an Avon Representative. She has since enjoyed the freedom of being her own boss and designing a business that is tailor-fit to her lifestyle—one in which family time is always a priority. With her mother’s legacy and her family’s future as inspiration, Liz has grown her Avon business into what is now a stable, thriving source of both livelihood and purpose.

Avon, Liz discovered, was not only a beauty company and an earning opportunity, but also a global champion of women’s causes like the fight against domestic violence and breast cancer. Liz’s own battle with breast cancer brought her closer to the Avon Philippines’ Kiss Goodbye to Breast Cancer campaign, which supports the Avon-PGH Breast Care Center and the support groups in it. “As a survivor, I know the hardships of undergoing cancer treatment—the internal turmoil, the physical exhaustion, and even the financial burden. I experienced my lowest points during this difficult time in my life - times when I lost hope - but through it all, Avon has been with me.”

“The beauty Avon promotes is the kind that comes from within,” Liz concludes, “a passion and sense of purpose that shines brightest when we use it to touch the lives of others. This is what Avon has done for me and it's what I'd like to do for other women as well.”