Welcome to the Avon Philippines Website
Proud to Be Avon

• Avon launches Isolated Not Alone campaign to raise awareness of silent epidemic exacerbated by isolation during the global Covid-19 crisis;
• The Avon Foundation for Women announces $1m commitment to front-line services to support women and children in need and at risk; and
• Avon’s network of Representatives are rooted in communities and can offer lifesaving sign-posting to those affected.

Avon and the Avon Foundation for Women are launching an initiative to supportwomen and girls at increased risk of and suffering domestic abuse fueled by self-isolation and pressures of Coronavirus.

Women’s charities and organisations across the world are warning of an increase in violence, with reports of a spike in demand on front-line services, which are already under funding pressure. Reports from China suggest a threefold increase in cases reported in February compared with the previous year*. Domestic violence hotlines in the UK and US are reporting a similar spike – doubling according to some sources.

In response to this, the Avon Foundation for Women has pledged $1m to NGOs providing front-line services such as helplines and refuges. Additionally, Avon is launching a communications effort among its 5 million Representatives worldwide and their customers and communities. The campaign will focus on:

• raising awareness of the issue,


• signposting where to go for help and how to identify and support those at risk,


• calling on governments to support the provision of life-saving services, which are in danger of further funding cuts and de-prioritisation.

Angela Cretu, Avon CEO says: “Domestic violence is already an epidemic which is hidden behind closed doors. Like Covid-19 it’s a silent killer. An unintended consequence of the isolation measures needed to combat Coronavirus is that vulnerable women and children are trapped at home with abusers, and unable to reach out for help. Avon is a movement, and through our 5-million strong network and vast digital reach we will speak out and spread the word. And we invite others to join us. We’re going to make sure those who are isolated know they are not alone. “We also need to take urgent action to keep front-line services open. In addition to giving funds to NGOs through the Avon Foundation For Women our Avon teams will be donating vital products - from personal care to hand sanitisers and soaps - to refuges across the world.”

Avon is already disseminating information through and activating its network of Representatives across Latin America, working in partnership with sister company Natura. To protect those at risk in Argentina, for example, Avon is embedding emergency hotline numbers and other life-saving information into lifestyle content delivered digitally through Avon Representatives, so that women can access the support they need with reduced risk of exposure to abusers.

*According to Wan Fei, the founder of an anti-domestic violence not-for profit
**https://psa.gov.ph/content/one-four-women-have-ever-experienced-spousal-violence-preliminary-results-2017-national

We need you to spread the word. Show your support for the campaign by sharing the campaign on your social media with the hashtag #isolatednotalone on any social media channel. Should you have any information about anyone who may need support against domestic violence during the enhanced community quarantine, you may reach out to any of the the following Avon NGO Partners: 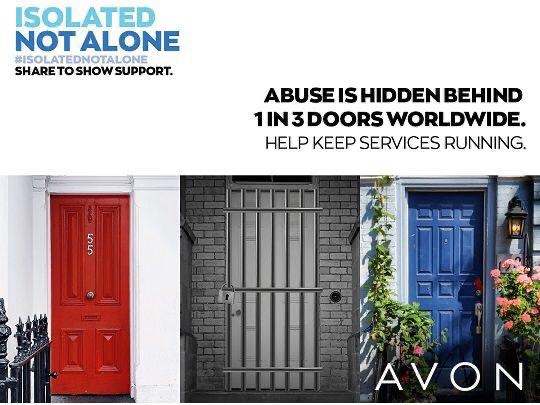 To our governments, governors, mayors, and legislators:


Like COVID-19, domestic violence knows no geographic or demographic boundaries. It’s a silent epidemic that is estimated to touch the lives of 35% of women around the world and is often hidden behind closed doors. And now, in the midst of the coronavirus pandemic, those women and children are increasingly vulnerable to domestic abuse: an unintended consequence of the isolation measures that leave survivors trapped at home with their abusers.

Frontline women’s non-profits and organizations are already seeing a significant increase in domestic violence cases, resulting in a greater demand for support services.

Supporting UN Women’s call to prioritize domestic violence survivors at this time, Natura &Co and its family of brands, Avon, Natura, The Body Shop, and Aesop are uniting with national and international organizations that deliver frontline services to domestic violence survivors. We respectfully ask that you ensure at risk women and children—particularly those who are socially disadvantaged—in your countries, cities, and communities have the support and resources they need.

In the spirit of collaboration and connection, we believe it is important to:
1. Give funding to specialist services that support women and children at risk of domestic violence—including shelters, helplines, and other resources—and ensure that resources are expanded, where necessary, to deal with the increased incidence of violence
2. Keep domestic violence front of mind with public awareness campaigns to ensure the problem is not overlooked
3. Declare domestic violence shelters essential services and lift restrictions on domestic violence survivors for whom self-isolation may be their most life-threatening option

At Natura &Co, we believe business can and should be a force for good. Together, our four brands represent the world’s largest women’s network, connecting more than six million representatives and consultants, and 40,000 employees with 200 million consumers in 110 countries. Together, we can make a difference, and this is what drives us to support domestic violence survivors with our #IsolatedNotAlone campaign:

1. The Avon Foundation has committed US$1 million to domestic violence support groups around the world that focus on direct impact, grassroots initiatives.
2. Avon, Natura, The Body Shop, and Aesop will donate essential personal care packages to shelters in their local markets, and will engage their customers to donate locally.
3. Each brand will raise awareness through its social media channels to support survivors, their friends, and their families, sign-posting help and sharing advice on staying safe

In this extraordinary and challenging time, we are so grateful for the efforts of governments, businesses, and civil society to protect all of us from the coronavirus pandemic. Our ask is that we do not allow domestic violence survivors to become the hidden and forgotten victims of this terrible situation.